Added to your shopping bag

If you love science experiments and incredible moms … read on!

All of us at Ceres Chill is delighted to share this epic review from Verified Purchaser Renee! 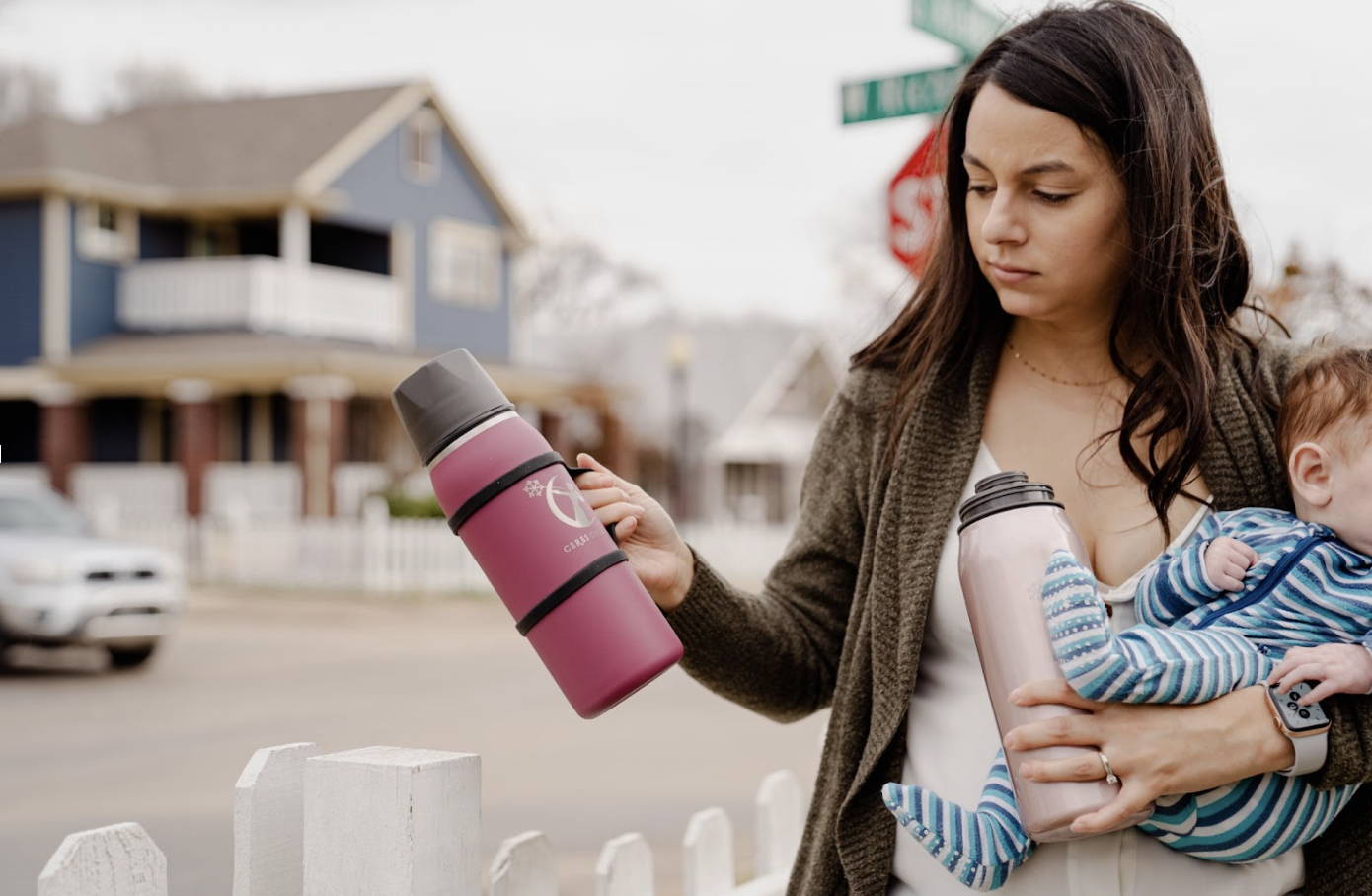 I’ve been watching this company for a couple years now, since before the birth of my son. Now that I am two months postpartum I thought that would be an excellent time to FINALLY treat myself to a Ceres Chill. Love that the company offers a 20% discount for first responders if you verify yourself through Gov-X; if you’re not one, fear not: it seems pretty common to be able to get 15% off if you do some digging or go on their email list.

Now for the meat of the review — and be warned, it is long. I really wanted to put it through its paces and test it out. The whole chiller just seemed so thoughtfully designed, it seemed important to validate performance. I suppose I’m just that "experiment and read ALL reviews" type, lol. :) There were four “use cases” I could see myself taking advantage of, so I recreated those conditions and did timed temp checks with a calibrated probe thermometer and, in one case, an infrared one. Scenarios were:

I’m adding the pic of the results for your perusal; sorry if it's unclear as I wasn't initially going to write a review. I only opened the chambers to take temps so as not to influence the results too much. 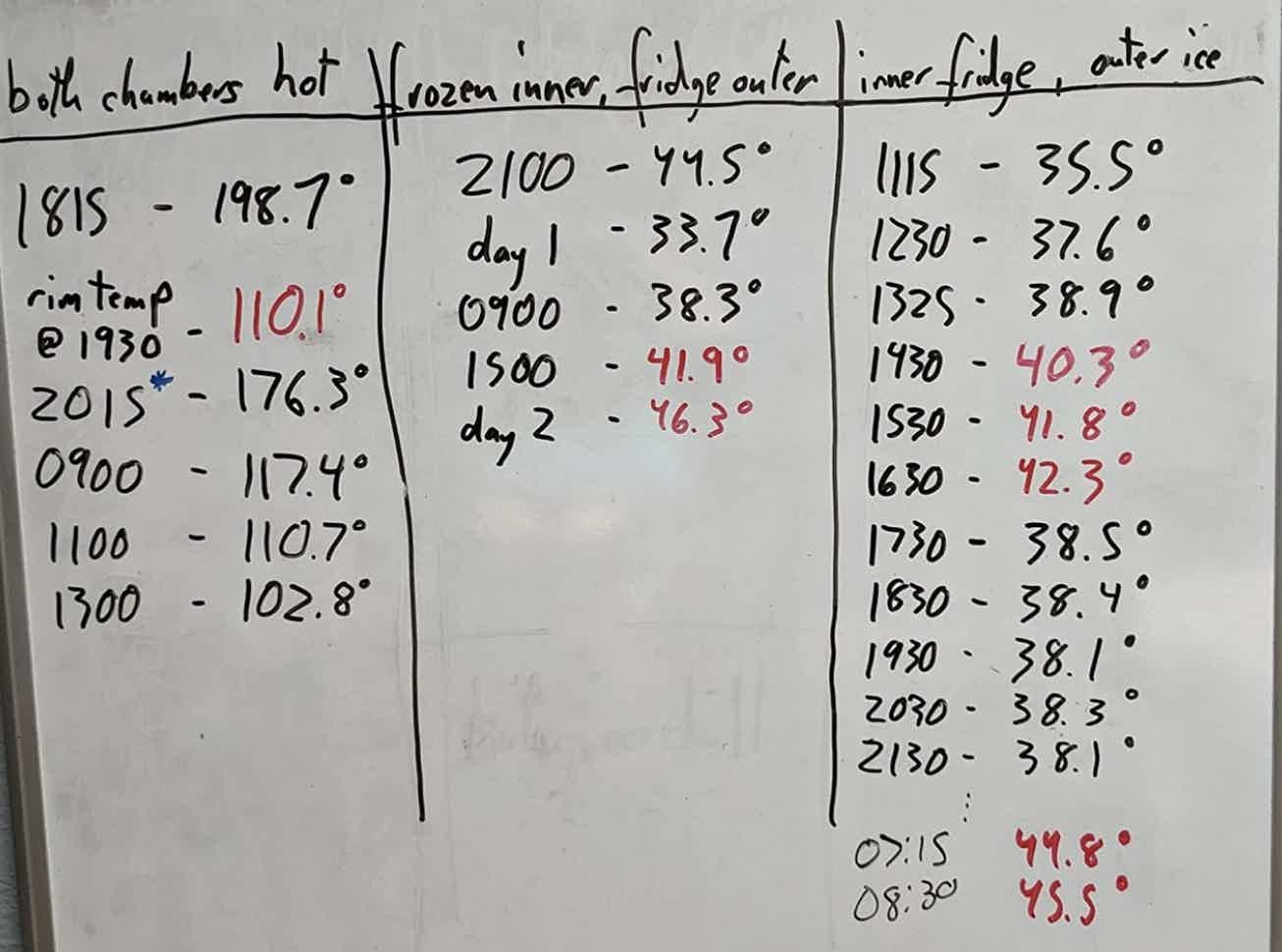 Here are some interesting tidbits/summary notes: 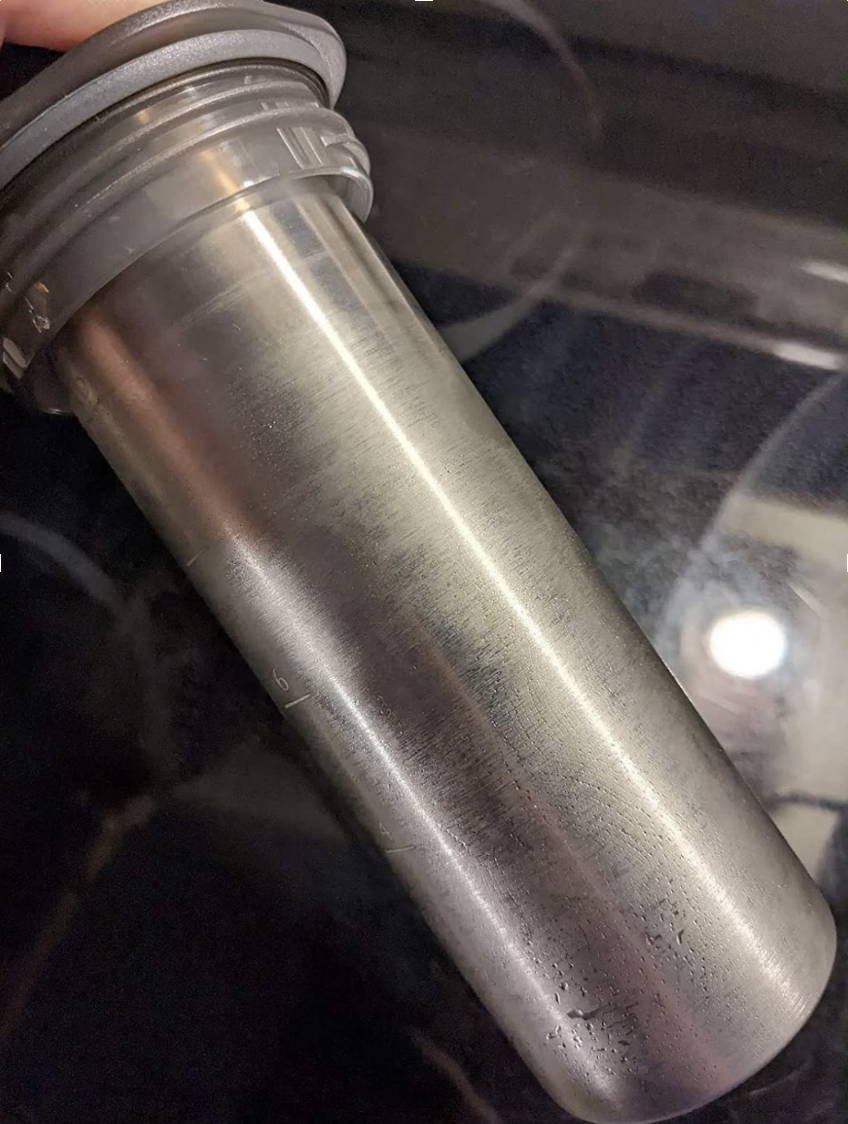 Probably the biggest suggestion I could add is the following: please etch ounce markings on the *inside* of the inner chamber. There are hashes on the *outside* of the inner chamber, but as it’s stainless steel there’s no way of knowing how much liquid is contained inside with any degree of accuracy. As it is, you need a secondary container with markings to measure volume, which seems … I don’t know, anomalous given how well-considered the rest of the chiller’s design is. How much more useful it would be to pump directly into the inner chamber if you could tell! How easy it would be to NOT overfill the inner chamber if you use the “freeze the inner chamber” method! Seeing as how the outer chamber has a “max fill line” stamped into *it,* maybe it wouldn’t be too much more hassle to add this to the manufacturing process? This would elevate the daily chiller use from “great” to “nothing left to complain about”, for me. Well, that, and adding a silicone sleeve that will slip over the inner chamber bundled with the “happily ever after” set would make the BEST sippy cup combo for kids! I suspect the Lifefactory 9 oz. baby bottle sleeves would work, but I’d love a Ceres Chill branded one.

All in all, I am SO pleased with the performance and can see myself using this in so many ways, even long after the feeding your children part is finished. It makes a fine thermos as is - there’s no dual-chamber one on the market as far as I can tell. This really increases its utility. Daresay, one may be able to sneak outer chamber fluid into, say, a music venue after dumping the inner chamber stuff at security. Not suggesting it, just sayin’. ;) Or use the outer chamber to store like a frozen slushy kind of drink … the possibilities are wide in scope. I do think this company is one to watch for further innovation in the breastfeeding accessories market, and I’m curious to see where they end up going. When I had a problem with my order unrelated to the chiller, the CEO/owner Lisa reached out and personally made it right despite it being a hectic time running a crowdsourcing campaign. Mad respect for that.

If you're on the fence: get one. This chiller has integrated pretty seamlessly into my life and I'm constantly finding new utility for it, and the Greek mythology reference is charming. I hope it does the same for you.

{edit}: I also wanted to address the review claiming that ice left in one chamber while leaving the other chamber empty will cause condensate to form, thus "diluting" your milk. As I understand it, condensation occurs here when water vapor in the surrounding atmosphere comes into contact with a cold surface, the vapor then cooling rapidly and releasing the water stored onto that surface. I say that because I was unable to replicate a worrisome amount of condensate forming EXCEPT by making the chiller open to air, which... yeah, no person would do this, especially filled with milk. If you leave the empty chamber open to air then, of course, you'd be condensing the droplets in THAT air. But if you close the chiller, as intended, the only air that'd be in contact with the ice chamber is that which is only inside the chiller. You'd also be dealing with far less surface area for condensate to form on, as you'd be storing milk. After experimentation with icing both inner and outer chambers independently with a closed chiller I feel safe saying this was likely user error, as I got very little condensate (see the picture of a frozen inner chamber taken from an empty outer chamber). If this scant amount might matter to you, as always, feel empowered to experiment on your lonesome and make the chiller your own. :)